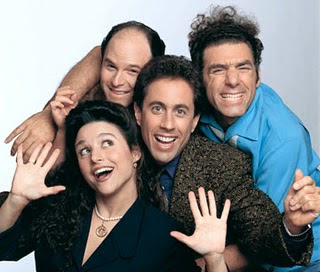 Kramer is not your ordinary ‘hipster doofus’ who listens to the alternative media. He is eccentric to the core from his wild hair to his crazy ideas like a coffee table book about coffee tables or a colon that smells like the beach. He also knows absolutely everybody in the community and is a man of the people. Whether he is on strike for 10 years from the bagel shop or participating in an AIDS Walk he is not one to shrink from a community event or cause. I didn’t even think twice about this one; Kramer has an Aquarius Sun.

Kramer is also a man who likes to make a big entrance and he is always open to trying new things without even thinking about them first (i.e. adopting mile 114). He starts many new projects, but seldom finishes anything (i.e. the levels in his apartment). He lives in the moment whether he is inviting people up to his place to smoke cigars or deciding to meet up with Jerry at the cabin as an immediate reaction to answering a phone call in Jerry’s apartment. He also cannot help but blurt out the truth as he sees it (i.e. the nose job comment). It seems to me that Kramer has an Aries Ascendant. This puts his Aquarius Sun in his 11th house of community, friends, goals, and wishes. This further emphasizes his community involvement and his high hopes described by his Aquarius Sun. This also puts Libra in his 7th house. Kramer is surrounded by people willing to help him, including a woman he dated purely for her long back-scratching fingernails, for example.

Though Kramer does not hesitate to reveal the truth regarding others he certainly can keep plenty of secrets about himself. For example, he kept his name (Cosmo) a secret from Jerry for over a decade before finally revealing it when George overheard Kramer’s estranged mother blurt it out. In that episode it became clear that Kramer had some deep issues associ 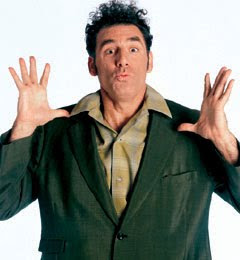 ated with that name and with the person who gave it to him; his mother Babs. He also experienced a betrayal in that episode as his friend; Newman (an obvious Scorpio Sun) was caught sleeping with Babs. Despite this he maintains a strong loyalty to his mother and even defended her when a man was bad-mouthing her in another episode. This loyalty toward important older women in his life was revealed by his strong allegiance to Bette Midler as he even turned against his friends George and Jerry when he believed that they intentionally tried to injure her. Kramer also has experienced several instances of victimization as he’s been mugged on several occasions (i.e. the armoire, the AIDS ribbon, the Van Buren Boys, the karate class kids, etc.). This all adds up to a Scorpio Moon to me.

This Scorpio Moon lands right in his 8th house of other people’s resources, big payments, and ‘the taboo’. Whether he is smuggling Cuban cigars or smuggling Cuban refugees, Kramer is no stranger to the taboo side of life. Remember that he also dated a nun in training, dated the lab technician during the Mayor Giuliani blood test, and slept with an exclusive lesbian among other taboo and sexually related instances. He also has quite the gambling problem (emotional connection to big payouts) and seems to survive almost exclusively on other people’s resources, namely Jerry’s. But on the flip side he always has plenty of investors for his zany ideas. These qualities are certainly consistent with a Moon in the 8th house as well as in Scorpio.

Overall, Kramer is someone who knows someone for everything and he is not afraid to jump into things and live life in the moment. But there is conflict between his open and friendly Aquarian/Arian nature and his dark and secretive Scorpio side. His gambling issues are easy to see as his impulsive and open nature combines with an emotional attachment to large winnings and other people’s money. Also, when he had a run in with the cable guy Jerry was surprised to see Kramer being so sinister. Kramer replied with, “Oh you don’t wanna get on my bad side”. Kramer’s ‘friend of the world’ persona mixes with secretiveness as well, for example, with his friend Bob Sacamano who was involved in many of Kramer’s stories but who was never actually seen on the show.