The USA’s economy is struggling lately. From growing unemployment to sagging retirement funds, this is truly a testing period for the nation. In addition to this, financial scandals like Bernie Madoff and other risky lending practices are coming to light now. Astrologically we can look at a nation’s finances and economic conditions and assess the significance of the current times.

Venus is the planet that for a nation represents its resources and values. Note its location in the birth chart for the USA (see chart below) at 3° Cancer in the 7th house (circled planet on right side). As a nation this indicates an overall sentimentality toward security as well as a tendency to project our value and our resources outside of us. The general trend of the USA toward imports of natural resources and exports for manufacturing/labor are consistent with this general description. Also, on a personal level we prefer to outsource our retirement (i.e. security) to banks and other investments in the form of the stock market.

As the planets move through space they eventually form connections, or aspects, to this Venus point for the USA. These times indicate significant turning points with regards to the nation’s finances and economy.

Saturn (circled planet near top of chart in Libra) and Pluto (circled planet near left side of the chart in Capricorn) are both currently making significant aspects to this Venus point suggesting a very important time period for these issues in the USA. Saturn makes one complete cycle around the zodiac approximately every 29 years while Pluto makes one complete cycle approximately every 248 years. These two slow-moving outer planets are about to form a square (90°) with each other from November 2009 through August 2010 (check back in November for my article on this configuration). It just so happens that while forming this square with each other in the early degrees of Libra (Saturn) and Capricorn (Pluto) that they will both be forming aspects to the USA natal Venus in Cancer. Saturn will be forming a square (90°) to Venus and Pluto is forming an opposition (180°) to Venus.

Just like with the Moon’s phases, the other planetary bodies go through their own phases relative to the Earth. Like a New Moon, the start of any coupled planetary transit cycle begins with their conjunction (same location in the sky). As the transiting planet moves away from the natal planet, eventually it comes to a 90° angle (waxing square) to it, followed by the 180° opposition (like a Full Moon), the second 90° angle (waning square), and then the cycle finishes when a new cycle between the planets is born at the next conjunction. See below for the basic outline of the process including the associated energy of each of these important climax points in the planetary cycles:

Both Saturn and Pluto are now at significant turning points in their respective cycles with the USA’s natal Venus. Below is a look at the most recent Saturn/Venus and Pluto/Venus cycles for the USA. I will discuss where we are now in these cycles and how we could use this information as an opportunity to move beyond our current financial paradigms and any transgressions which have revealed themselves during this period.

This was a brief transit that initiated a new cycle with regards to security (Saturn) and our finances/economy (Venus). The Jobs and Growth Tax Relief Reconciliation Act of 2003 (i.e. the Bush tax cut) was finalized just a few weeks before this period. This lowered tax on income from dividends and capital gains (i.e. retirement security). Also during this period, after a general rise in the stock market, this period in late June/early July 2003 yielded a stock market stall with a slight dip especially seen in the SP-500 (see graph below). 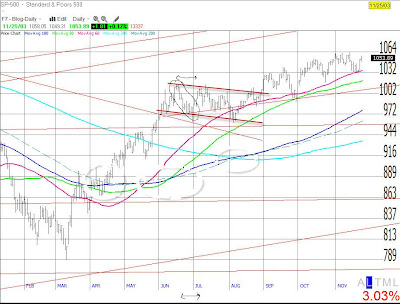 We are now entering this period which represents ‘growing pains’ associated with what was initiated in the summer of 2003. Could the Bush tax cuts reveal problems as the middle class feels the burden taken from the wealthy? Could the stock market stall or dip for this extended period like it did in 2003 causing citizens to question their long-term security?

This time period initiated a new cycle with regards to power/resources (Pluto) and our finances/economy (Venus). This was the general period of WWI and a time when the USA was discovering and creating the mechanisms of the oil business. Out of this period came US Code Title 19 Section 1332(c) which gave the US International Trade Commission the ‘power to investigate the Paris Economy Pact and similar organizations and arrangements in Europe’. The Punitive Expedition in Mexico also occurred between 1916 & 1917 where the USA invaded Mexico to suppress an uprising during the Mexican Revolution. This border invasion created tension between the USA and Mexico.

This period represented ‘growing pains’ associated with what was initiated from 1914-1918. During this time there was a large recession as well as an oil crisis. This was also the end of the Vietnam War and when the Watergate scandal surfaced. Note that these occurrences during the waxing square phase represent the warning signs or indicators of that which was initiated during the conjunction. Oil/resource issues, questionable foreign occupation, and unethical investigations are what occurred during this time period. These actions are easily relatable to those conditions introduced in the above paragraph on the initiation of this cycle.

We are now right in the middle of the culmination period for this cycle. We are reaping what we have sown in the beginning of the cycle as well as reap what we saw and allowed to continue to grow during the waxing square period. Yet again we find ourselves involved in an issue of questionable foreign occupation and dealing with resource issues including oil. Will we finally get our troops out of Iraq or find it is in our best interest to cross over someone else’s borders? Could we be finally dealing with the side effects of peak oil and oil’s inevitable depletion? Could the ‘global warming’ issue and other environmental factors force us to seriously explore alternative energy options? Could there be an all out investigation (i.e. a 9/11 investigation or more financial scandals) that yields truths we are not prepared to hear and which challenge our values as a nation?

Saturn/Venus cycles are ideally about tightening up economic security. Decisions made at the start of the period regarding these issues have a lasting effect. The waxing square period of the Saturn/Venus cycle that we will encounter from November 2009-August 2010 will introduce us to any benefits and/or shortcomings brought about by the direction we started to head in the summer of 2003.

For example, if our retirement accounts start to show promise during this period due to lowered taxes on dividends and capital gains in the 2003 tax cuts then we will know that this was a good move in retrospect and that we should encourage similar practices to improve our financial portfolios.

However, if the market hiccup during the brief initiation period in the summer of 2003 repeats itself but only for a longer period, people may panic and begin removing their money in droves causing widespread financial collapse by the end of August 2010. In this case we would know that perhaps ‘top-down’ economics isn’t working so well. It would then be our responsibility to make adjustments during this period to ensure that there isn’t a collapse of the market.

We can use the Saturn/Venus waxing square period to make quality adjustments to the security of our nation’s finances by seeing what reveals itself with regards to what was started in the summer of 2003. If we recognize the shortcomings and make solid tangible adjustments we may well ensure our financial security and see the results of these adjustments revealed in 2018 during the opposition period.

Pluto/Venus cycles are ideally about transforming the way that we value things to truly reflect our image. Decisions made at the start of the period regarding these issues have a lasting effect. The opposition period of the Pluto/Venus cycle that is occurring from January 2009-November 2010 is revealing to us what we have sown back at the start of the period (September 1914-May 1918) and what we had allowed to continue during the waxing square period (September 1972-June 1974).

We are undoubtedly dealing with the results of decisions long ago to create a society so heavily dependent on oil from foreign countries. Our sense of entitlement in terms of national borders has also revealed itself. Over the next year we may very well find that the price of oil skyrockets and that we just aren’t in a position to sustain our energy demands domestically. This could lead to our continued intrusion of other countries to claim our perceived ‘rightful’ ownership of resources.

In the early 1970’s, during the waxing square period, we had opportunities to adjust our sense of entitlement after the Watergate scandal and the Vietnam War and to adjust our dependence on foreign oil during the oil crisis. In many ways we have not learned from these experiences and we are now reaping the results of failed adjustments from that important decision making period.

We can use the Pluto/Venus opposition period to accept the effects of potentially harmful decisions regarding the use of natural resources and the ethical dilemma of entitlement over other’s borders. If we humble ourselves we may realize that we could have done things differently and then decide to head in a new direction from there. But this requires us to actually admit that we were shortsighted and that we are willing to transform our values system to better reflect what we believe our true image to be as a nation. So far, the USA has yet to display any form or humble regret for actions of the past. But this does not mean that it is not possible in the future.

Readers, if you enjoyed the content of this type of article, please check back as I will be posting articles soon related to other planetary cycles which are at major turning points over the next few years as well. Check back soon and visit www.myastrochris.com!

Posted by Christopher Robert Taylor at 9:57 PM No comments:


Do you want to have your chart featured on my website with a brief 20-minute YouTube interpretation from me?


Depending on the type of reading, the information can be very sensitive and revealing so we can discuss the level of confidentiality on a case-by-case basis. But if you are up for it, I will put you 'On The Spot' for a specified period of time and I will be 'on the spot' to come through with an accurate interpretation!